Bolt hobbing and finishing the Extruder

The Infill 3D extruder needed a hobbed bolt so a good opportunity to make one up.  Before starting I made a simple jig to hold the bolt to be hobbed in the vice of my mill.  It has a bearing at each end so the bolt can freely rotate to ensure nice clean cutting and can be downloaded here if interested

So, the bolt was fitted to the jig and the assembly held in the mill vice (I have removed the surface rust from the vice since the photo's were taken).  I opted to use an M5 3 flute steam hardened gun nose tap as these are the ones I use mainly for stainless.  The tap was held in the mill spindle with a collet holder to keep everything nice and rigid.  Then the tap was brought up to the bolt until the it just made contact then the X axis was zero'd on the DRO.

I chose a slow spindle speed and used Rocol cutting fluid, clearing the swarf from the tap every few revolutions.  After some trial and error I found that driving the tap 1mm into the bolt gave the right balance between depth of the teeth and depth of cut to give a nice radius to grip the filament.

All in all a great result was achieved.  The bolt cuts nicely into the filament without causing distortion and I have been able to run the extruder up to a speed of 600mm/min which is more than enough.  The limiting factor before slipping was the hot end not being able to melt the filament fast enough, not the extruder mechanism.

It is also interesting that the Verbatim ABS filament seems far less brittle than a cheaper 3rd party filament.  Given how long a print can take I think the few extra $$ on a quality filament is worth it 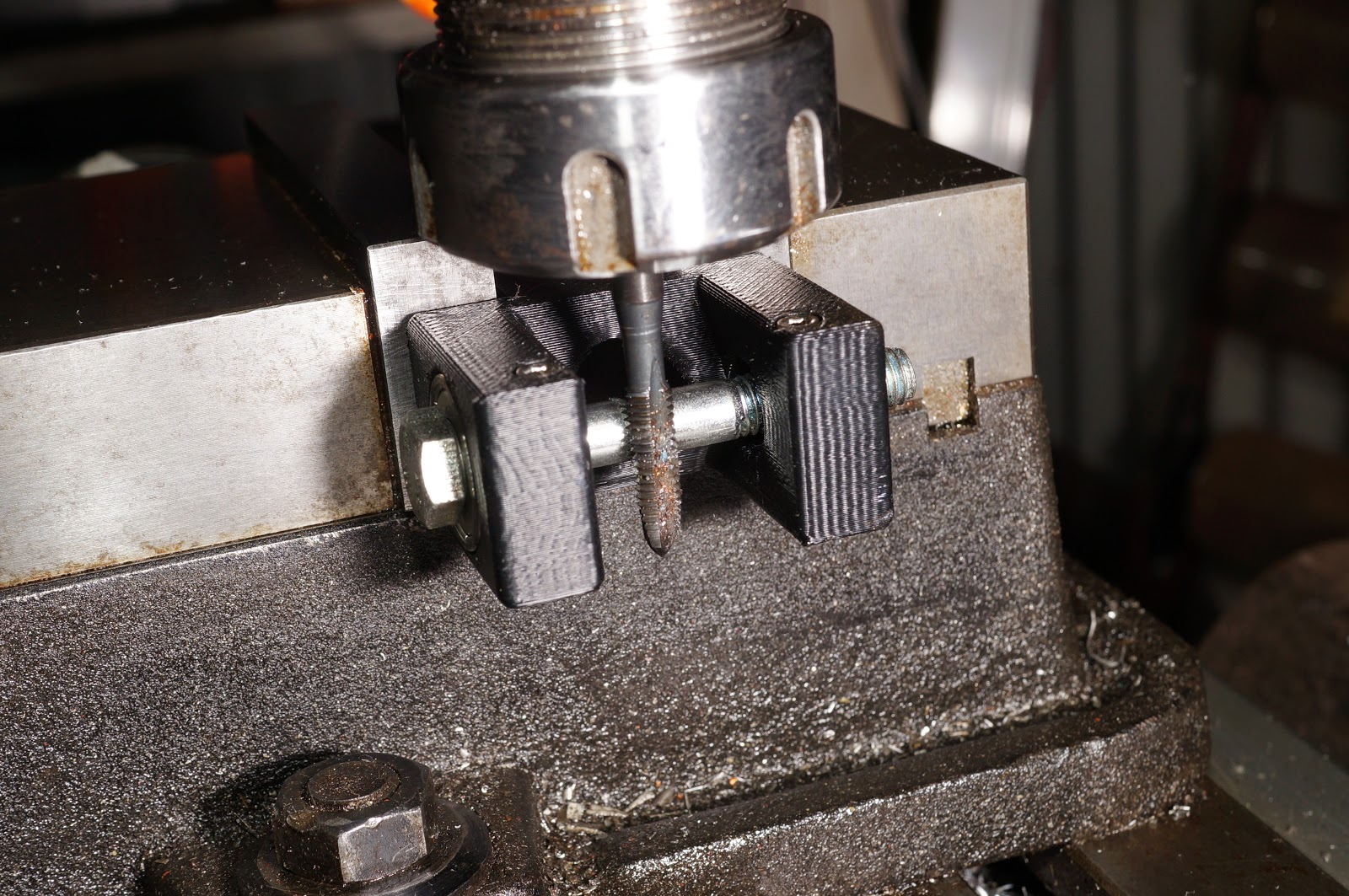 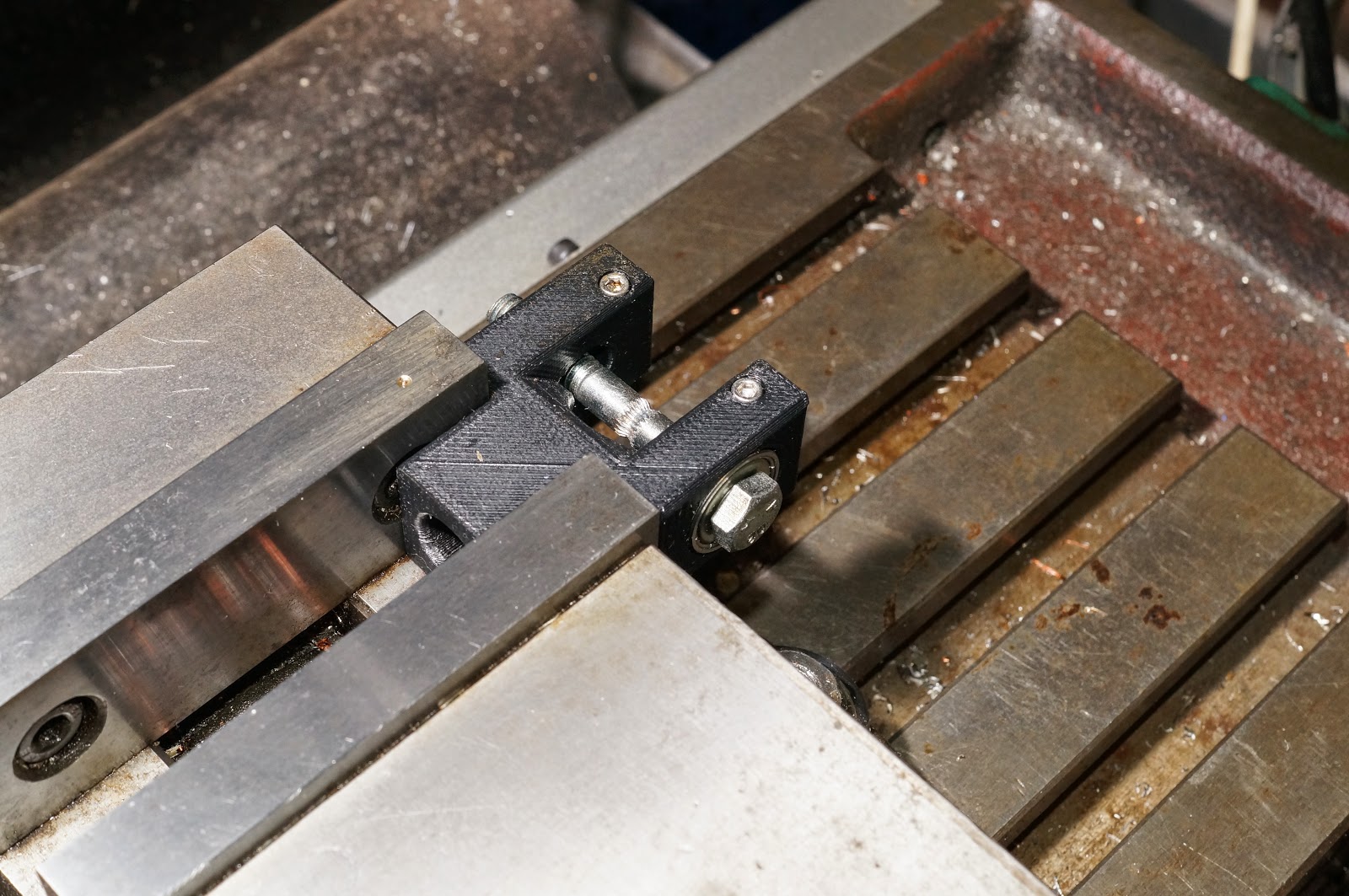 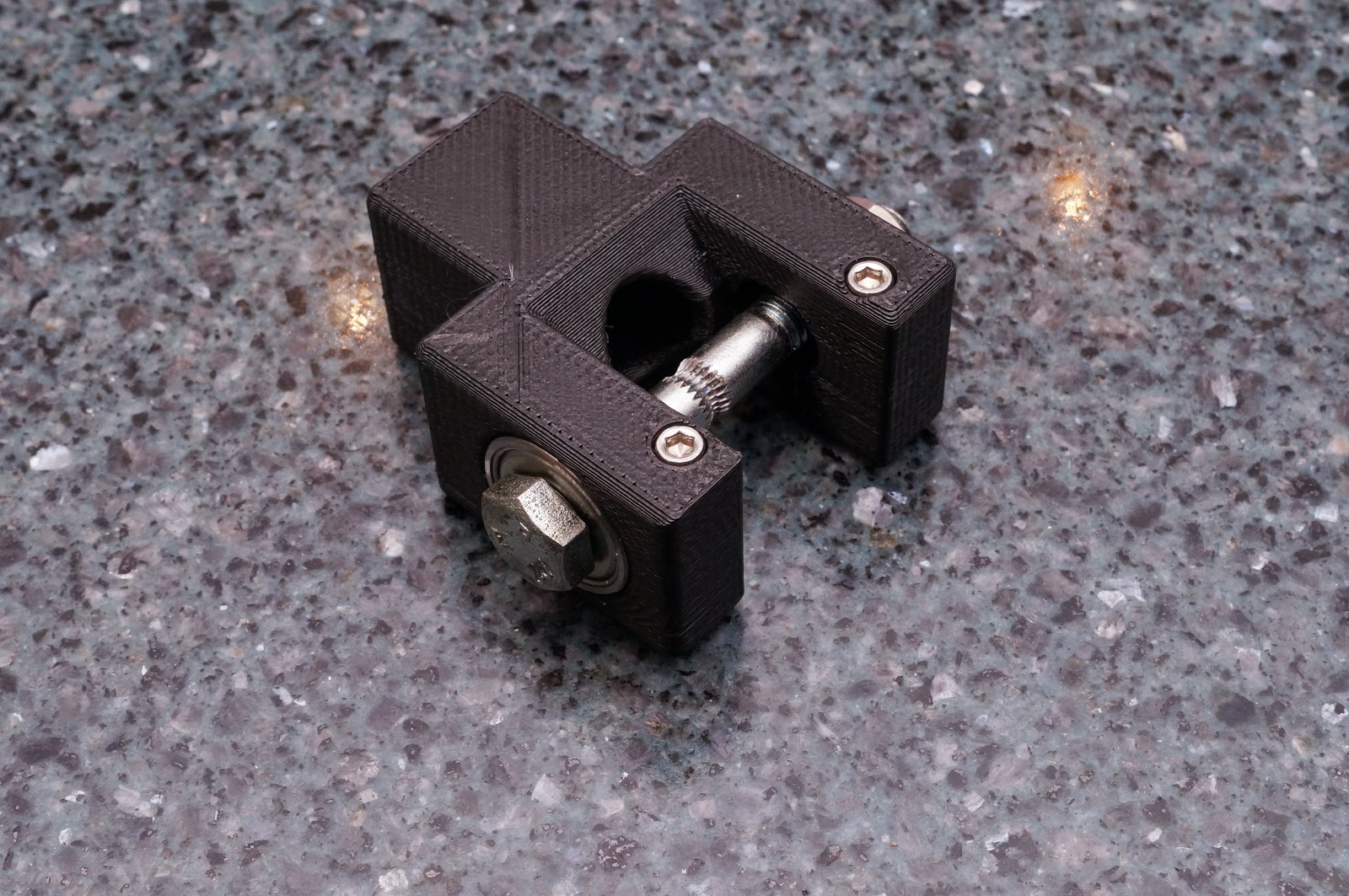 Now the bolt was machined I was able to finish the assembly of the extruder and tune the feed rate. Proterface was used to send the signals to the extruder which is powered by the #smoothieboard.  Again I cannot speak highly enough of just how easy the Smoothieboard is to use.

First do some test runs to ensure the tension on the forcing springs are enough, that everything moves as expected and things are tight.  Also check and adjust if required the stepper motor amps and in the firmware.

1. Mark the filament 120mm down from the extruder inlet using some vernier calipers.  The spot you use as a reference on the extruder needs to be repeatable.

2. Send 100mm of filament to the extruder using Pronterface.  I chose a feed rate to 300mm/min as this seemed a good staring point similar to what will be used when printing.

3. Measure the actual amount of filament extruded using the same reference as above and write the number down. Mine came up short only extruding 89mm.   My firmware by default had a value of 140 for extruder_steps_per_mm and it is this that is altered to correct the feed length.

5. Open the config file on the mounted usb using notepad, replace the steps/mm with the new value, save and close notepad and reboot the smoothieboard.

6. repeat steps 1-5 and adjust if still not correct. 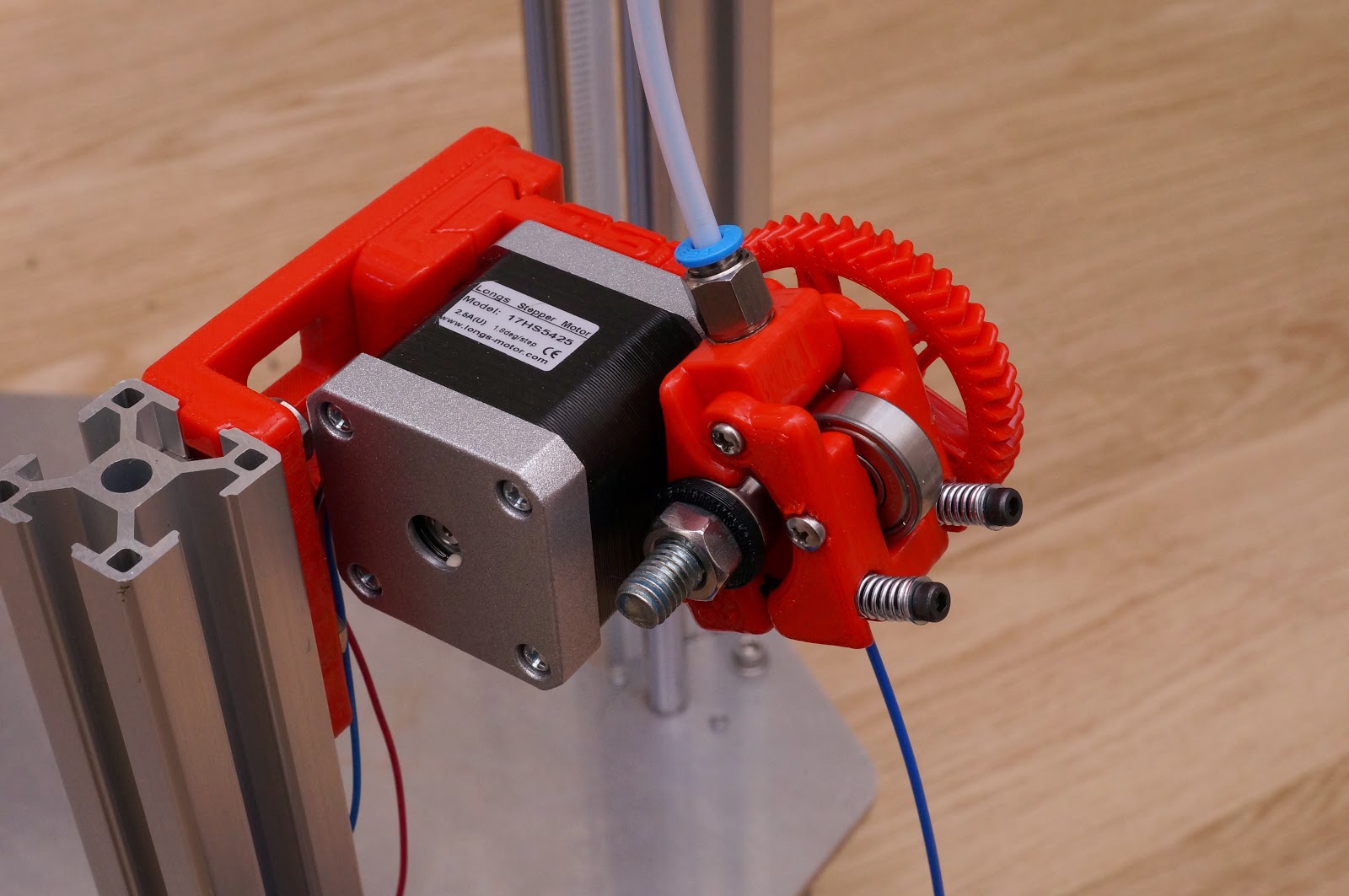 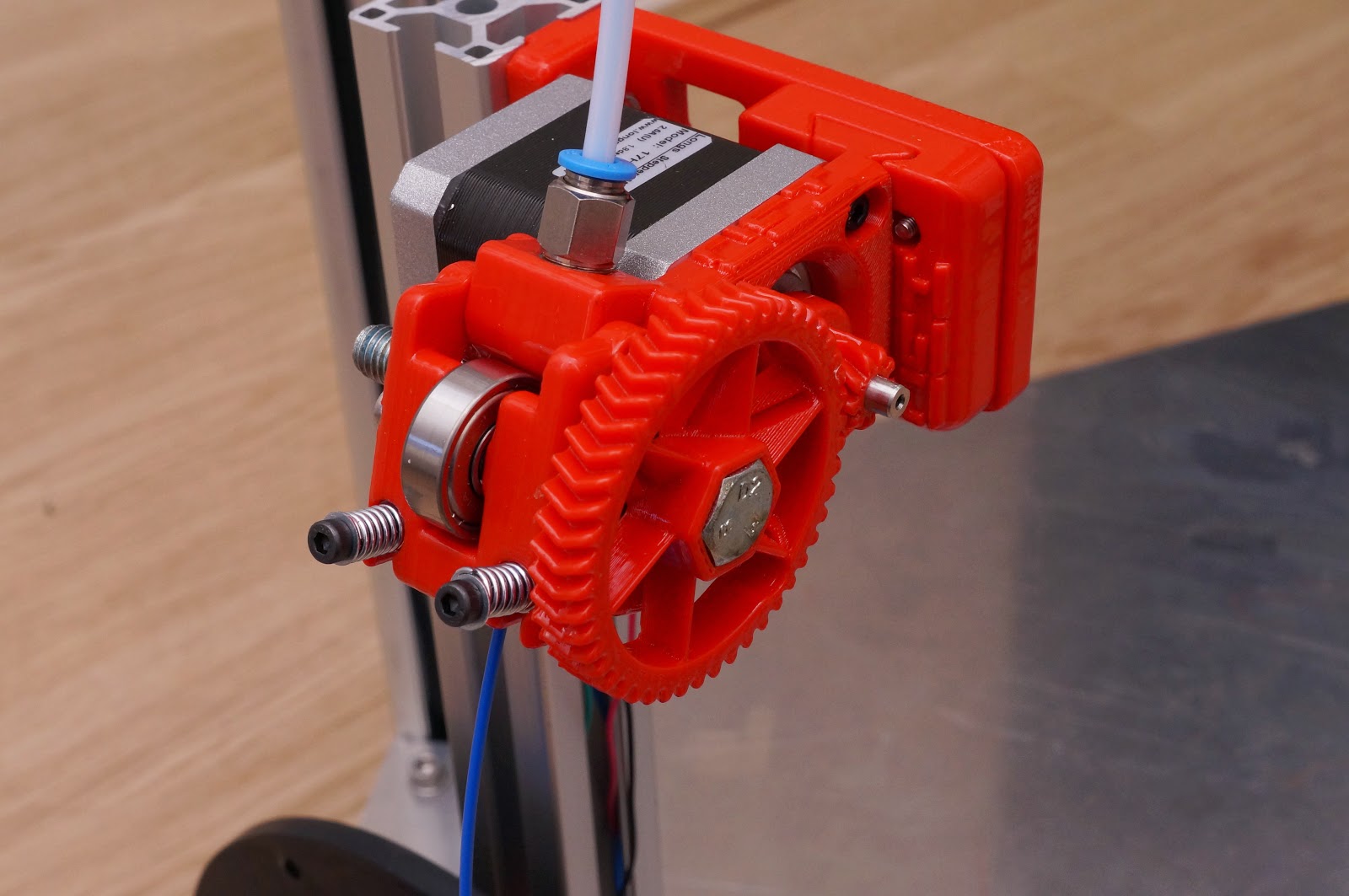 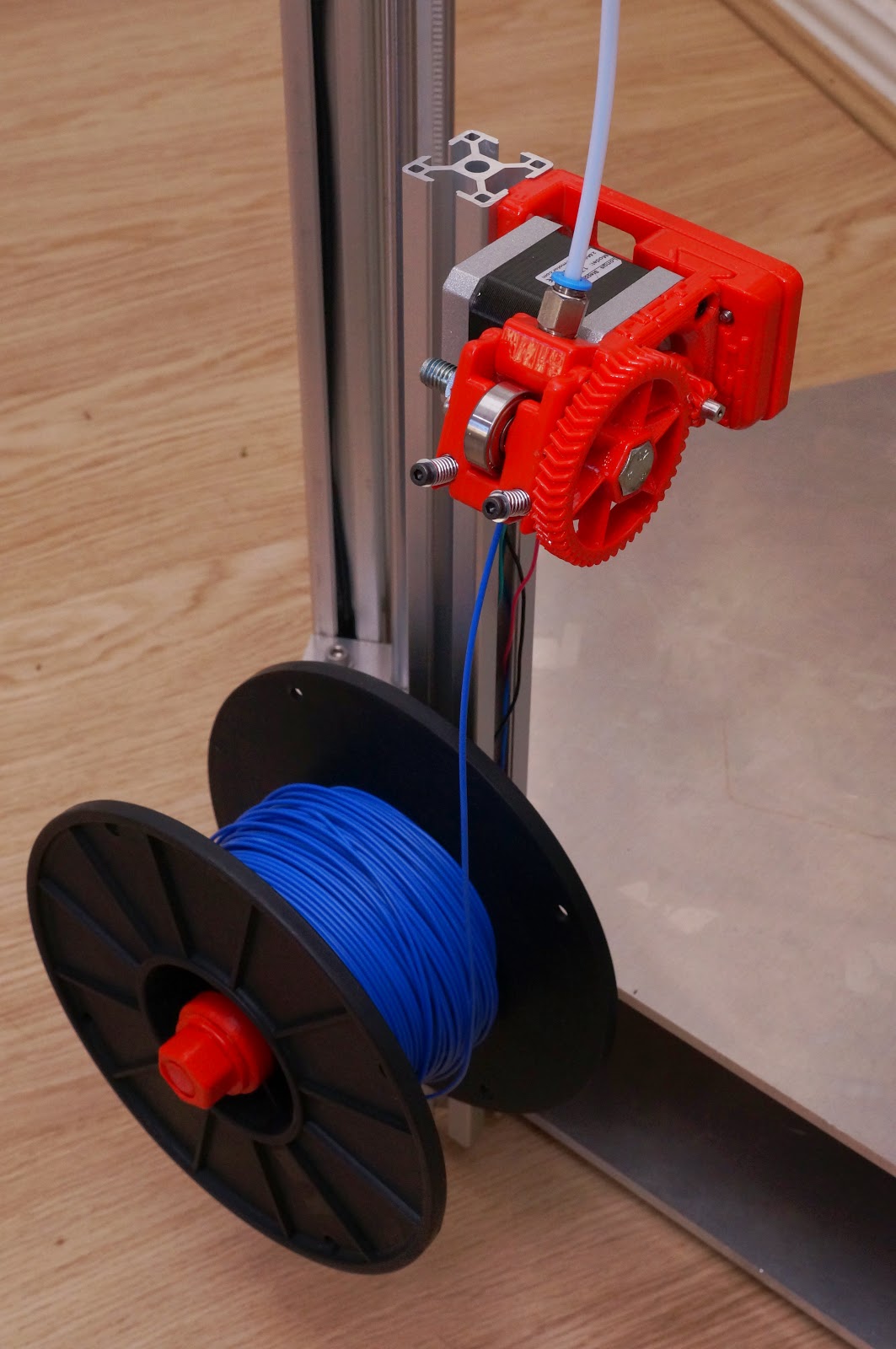 An update on the extruder and how well it works.  Since there are still parts to be made for the heated bed and really wanting to print something,  I zero'd the X, Y & Z by send the nozzle down to the floor plate of the printer and adjusting it's height until a piece of paper just slipped between the nozzle and base.  Then the code G92 X0 Y0 Z0 was sent to the #smoothieboard via Pronterface followed my M500 to save the new data.

Next, some green masking tape was stuck to the bed and cleaned with an alcohol wipe.  Using Cura I sliced a smaller version of one of carriages I used in the build and exported the g-code.  Using a print speed of 100mm/sec and 0.4mm layer height, the parts G code was loaded into proterface and pressed print.

Carriages homed, the hot end heated to 240°c and down she went.  To my surprise since I have not done any calibrating or tuning yet it started printing and printing well.  The video is a short slice of the print.  I later printed 2 of the Aria Dragons at a print speed of 150mm/s and had equally good results.  Can't wait to get the printer finished and tuned as I have a feeling it is going to give excellent results.

Should also say that the Infill 3D extruder works brilliantly so thanks guys for providing the files for us to make our own.